Collections and Anthologies - Best Of

We're all familiar with Flute Music by French Composers and 24 Short Concert Pieces. Heck, you could even say that they're the backbone on which the modern flutist is built - though if you did say that then Taffanel and Gaubert might want some very pointed words with you. Regardless, anthologies are an essential part of instrumental repertoire for three simple reasons: they are convenient, they are more affordable (much more affordable) than buying individually, and they let you experiment without springing for an unfamiliar piece - you can hedge your bets, eh? There might be a dud, but it might be balanced out by a masterpiece.

Here, we'll cover both new collections with cheaper alternatives of some modern standards, and scratch the surface of unfamiliar (yet extremely worthwhile) repertoire that not everyone might have encountered. 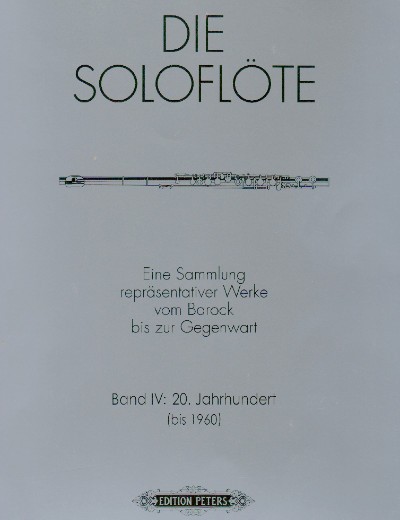 Published by Edition Peters in 2006, this volume is the final (and possibly most exciting) in a four-part series of flute alone music from four different periods - the Baroque, the Classical, the Romantic, and this 20th Century volume - all containing music ranging from common to incredibly obscure. In essence, these are sample platters of the musical periods - if some of those samples were more like full meals plus dessert.

All four volumes are worthwhile and beautifully printed, but we shall primarily focus on the 20th Century book here because of this simple fact: For $35.25 you get Debussy's Syrinx, Karg-Elert's Sonata appassionata, Honegger's Danse de la chèvre, Rivier's Oiseaux tendres, Fukushima's Requiem, and Berio's Sequenza, on top of more obscure yet equally fantastic music and several single- to quadruple-movement extracts from pieces like de Lorenzo's Suite Mythologique, Jolivet's Incantations, and Hindemith's Achte Stücke.

The other three books are more exploratory in form given the widely-available nature of older music, though they do contain a few standards. The Baroque volume, for example, has both the C.P.E. and J.S. Bach Sonatas in a minor and the Marais Les Folies d'Espagne, where the Classical and Romantic volumes explore the more obscure Muller, Traeg, Drouet, and so on - including Briccialdi's extensive showpiece Variations on a theme from Bellini's Norma.

It's safe to say that these collections are extensive. 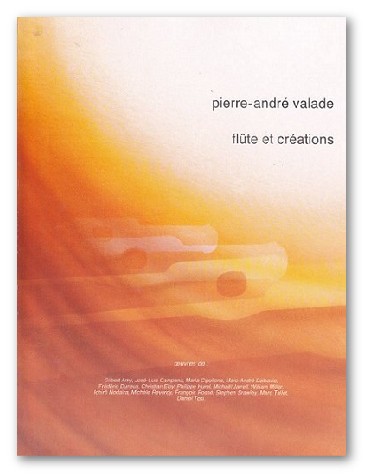 The solo collection Flûte et Créations, assembled by Pierre-Andre Valade, is rather different - though still, it should be noted, extremely French. This is a collection of High Modern works with numerous extended techniques, which include our usual flute options (flutter, harmonics, pizz, voice, etc), of course, but also notational and compositional techniques that stretch the ideas of music.

Importantly, the collection comes with an additional part (the same size as the collection itself) that contains both a thorough overall method and individual guides for each work. It's fully written in French - but that's not so much a problem when Google Translate can take a picture and translate in less than 10 seconds - and it's easy enough to understand alongside the graphics and musical examples.

Really, this is a collection born of the editor's deep appreciation for contemporary music, and it shows.

Eight Visions: A New Anthology for Flute and Piano 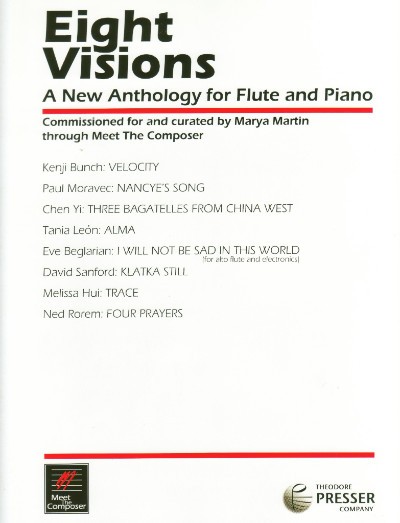 Commissioned for Marya Martin as part of Meet The Composer, this collection is one of the most exciting 21st Century publications for flute and piano in print - and the National Flute Association agreed in 2010, awarding it winner of the NFA Newly Published Music competition. However, it's still not as widely known as it deserves, and given the quality of the music within that seems a shame.

The collection is full of new masterpieces, and that word isn't used lightly. From Kenji Bunch's Velocity - rhythmic, infectious, and gorgeous - to Tania Leon's beautiful experiments with sound in Alma and the quasi-Jolivet modernism of David Sanford's Klatka Still, the collection covers much of the tonal and semi-tonal style being experimented with today in American music in competition- and recital-ready masterworks. It also contains two of the most recently popular smaller recital pieces: Chen Yi's Three Bagatelles from China West and Eve Beglarian's I Will Not Be Sad In This World, the latter for alto flute and tape. 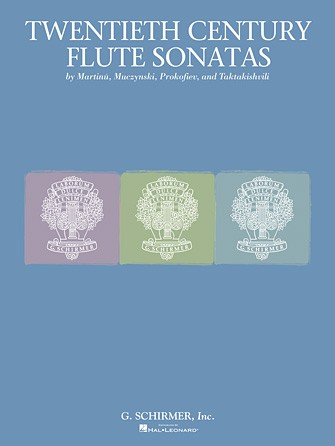 Newly published by Schirmer - just two years ago, in 2013 - this collection contains the Martinu, the Muczynski, the Prokofiev, and the Taktakishvili. That's not a misprint; all four major sonatas are included, in excellent print quality. The virtues of the individual pieces do still exist - for example, Schirmer's individual Prokofiev includes the violin version in the piano part, which is quite useful if you're in the habit of borrowing the changes done for the violin - but, outside of specialty needs, it's safe to consider this collection a new standard.

Truly, the table of contents is all that needs to be said.

Special Note: The Prokofiev Sonata is also playable as a concerto, fully orchestrated by the expert English composer and arranger Christopher Palmer, in an extremely well-done mimicry of Prokofiev's orchestral language. Parts are available for hire from Schirmer. 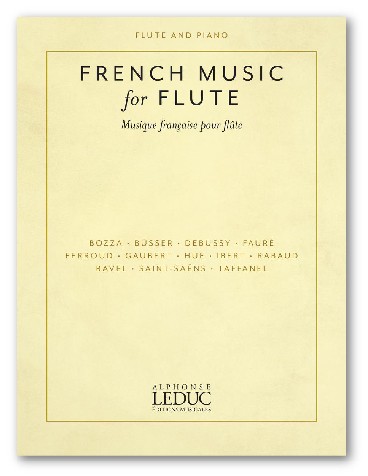 The French Music for Flute collection, new from Alphonse Leduc (!), is impressive to the point that it might be a fair contender to Flute Music by French Composers as a must-have* book - especially as it contains the Hue Fantaisie, the Bozza Image, and the Ibert Piece, among other rep standards.

Frankly, we're surprised Leduc is prepared to offer such previously expensive works in such a relatively affordable way - but we're not going to complain.

*We don't like to use the words "must-have," but in this case - like the collection Twentieth Century Flute Sonatas, with Martinu, Muczysnki, Taktakisvhili, and Prokofiev - Leduc's French Music and its table of contents does hold a certain sense of "dang."

The Flute in Worship
in 3 Volumes: Hymns of Praise, Easter and Lent, Christmas

These three books assemble Mary Jean Simpson's lovely arrangements of hymns into three volumes of easily-used material - a general volume of all-purpose hymns, a volume for Easter and Lent, and a volume for Christmas.

Markedly, these arrangements are much more than simple transcriptions; they use the flute fully in its ability to sing and elaborate on the original melodies. However, just as importantly, they're respectful enough that they can be used easily for church and holy services. Finding that balance between simplicity and idiomatic flute writing is difficult, so it's quite nice to have these available! 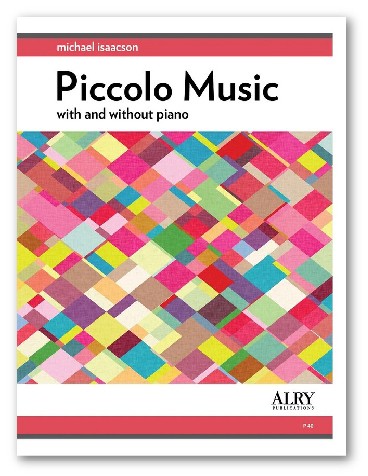 Michael Isaacson's piccolo works have been standards and familiar recital works for years, especially Icky Picky Piccolo for solo picc and Niggun for piccolo and piano.Here, his complete piccolo works are collected together for ease of playing and, especially, to bring down the cost; the collection is just a few dollars more than any of the individual works and is a whole lot nicer.
Essentially, if you or your students are planning on getting any of his works, get this book instead - it's worth it.