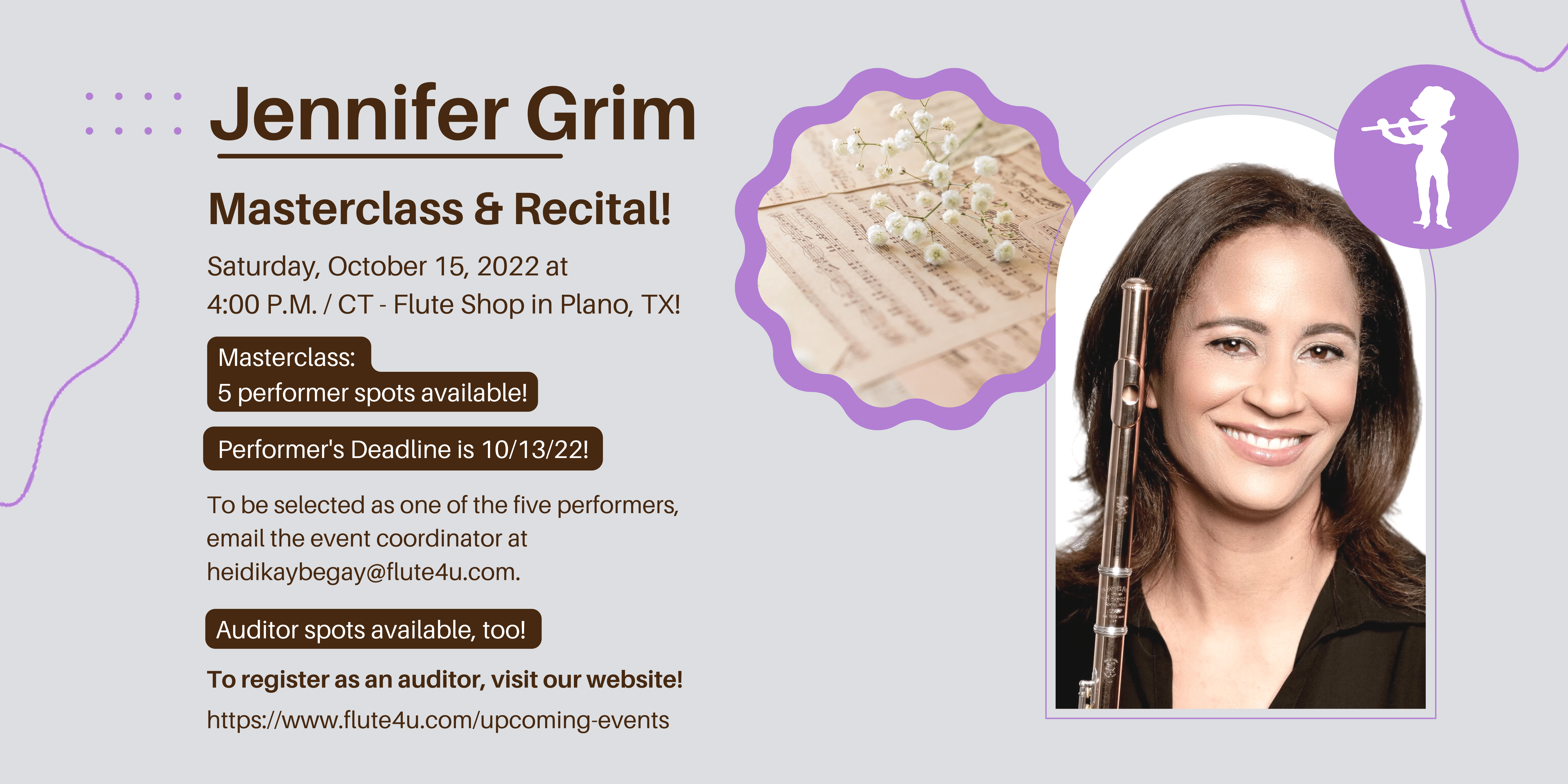 Deadline to apply as performer or auditor is 10/13.

Performers - $75 fee due only if you are chosen to play. This fee covers the masterclass, recital, and reception.

Auditors - $25 in-person fee includes attendance to masterclass, recital, and reception. $15.00 for virtual auditor ticket. Once you have made your purchase, then a separate email will be sent to you where you can access the Zoom link.

Performer's link to purchase will be available after all 5 performers are chosen by 10/13/22.

Hailed as "a deft, smooth flute soloist" by the New York Times, Jennifer Grim's remarkable depth and breadth as a performer of solo and chamber repertoire has gained broad national acclaim. She has performed with such renowned ensembles as the Chamber Music Society of Lincoln Center and St. Luke's Chamber Ensemble and is the flutist of the award-winning Zéphyros Winds and the New York Chamber Soloists. She also serves as Principal Flute of the Mozart Orchestra of New York and the Santo Domingo Festival Orchestra and has given solo and chamber performances throughout the United States and in China, Colombia, Panama, Dominican Republic, Ukraine, the Netherlands, and Spain.

An avid baroque flutist, Ms. Grim studied with renowned artists in New York, Boston, and Amsterdam and is a member of Cosmopolitan Baroque. The ensemble has been in residence at the University of Nevada, Las Vegas (UNLV) and Dixie State College. In demand as a clinician, she has given masterclasses across the country, specializing in both solo and chamber music.

In 2012, Ms. Grim founded the UNLV Chamber Music Society, an organization that presents concerts performed by UNLV faculty as well as esteemed chamber ensembles such as the Ying Quartet, Boston Brass, Horszowski Trio, American String Quartet, and many others. She is also a passionate advocate of diversity initiatives in the field of classical music, and has curated concerts featuring African American, Latin American, and Latino composers. Ms. Grim was recently awarded a Provost Research Award from the University of Miami for an upcoming recording project of the works of Valerie Coleman, Alvin Singleton, David Sanford, Allison Loggins-Hull, and Diego Vega. She has also worked with the Youth Orchestra of Los Angeles (YOLA)  National Festival, which invites students from El Sistema inspired programs across the United States to perform in a national youth orchestra performance at Walt Disney Concert Hall in Los Angeles, California.

Ms. Grim is currently Associate Professor at the Frost School of Music at the University of Miami. She previously served on the faculty of the University of Nevada, Las Vegas for twelve years and in 2017 was honored with the Teacher of the Year Award from the UNLV College of Fine Arts.  A native of Berkeley, California, Ms. Grim holds a Bachelor of Arts degree from Stanford University and Masters and Doctor of Musical Arts degrees from Yale University. Ms. Grim currently serves on the Board of Directors of Chamber Music America and was the Program Chair for the National Flute Association 2021 Annual Convention in Washington DC.